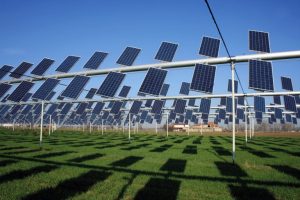 A European renewable energy company is stepping its presence in the UK market with new technology that could revolutionise the use of solar power in agriculture.

TEP Renewables is introducing a new system which will allow farms to generate solar power on site without sacrificing valuable agricultural land.

The company, which opened its first UK office in Coventry last year, has subsidiaries in Italy and Cyprus and holds a large renewable energy market share in Italy with projects totalling 600 megawatts of renewable power generation.

The Agrovoltaico system is patented by Italian company REM TEC Srl that has signed a cooperation agreement with TEP Renewables to implement the technology in various territories including the UK.

It allows farms to grow any kind of crop beneath the module, with no interruption to agricultural activity.

TEP Renewables is working closely with accountancy firm and advisors Burgis & Bullock, which has offices in Leamington, Nuneaton, Rugby and Stratford-upon-Avon, as it seeks to expand its presence in the UK.

The company is already in talks with large-scale farms in Warwickshire and the across the county to be involved in pilot schemes for the technology.

Leonardo Montesi, Chairman and CEO of TEP Renewables, said: “Since opening our offices in Coventry we have been looking for the best opportunity to enter the UK market.

“There is a lot of untapped potential with solar power in this country, and the introduction of this new technology will be of great benefit to the agriculture industry.

“We have put focus on growing our business in Italy which has been a huge success and now we’re aiming to do something innovative here.

“We’re working closely with possible financial investors and will also be applying for grants through Innovate UK schemes. We will be taking advice from Burgis & Bullock throughout this process.

“The technology removes the trade-off between having a solar plant and sacrificing valuable farmland, it’s unique and we’re looking to work with farms locally and nationally to test it.

“Countries across Europe are working towards 2030 greenhouse gas emission targets and major investment in technologies like this will be needed to achieve that goal.

“The system addresses the major issue of farmland consumption and we’re confident after speaking with local councils and administrations they will fully understand the benefit of the technology.

“By 2021 we’re aiming to have signed up two to three major solar schemes and to have given the company a foothold in the UK market.”

Grant Howard, Partner at Burgis & Bullock, added: “We’ve worked very closely with Leonardo for a number of years, firstly with his previous UK business and now with this exciting renewable energy venture.

“The Italian subsidiary of TEP Renewables works with some of the largest electricity producers in Italy and we’re working with Leonardo and his team to bring that expertise to the market here.

“This is an exciting time for the company as it continues to recruit new staff to its Coventry base and is set for significant growth over the next couple of years.”