Synergy is the rationale that is used to justify many public and private M&A deals and support the transaction price.  However, synergy is often little understood and still less valued correctly or actually delivered once the deal celebrations are over.  In this paper we consider the best ways to identify synergy, value it, and effectively price it into a deal.

Synergy is the benefit derived from bringing together two distinct businesses, which may be conveniently classified into operating and financial categories.

Operating synergies are the ability to increase margins, enhance returns from assets, or accelerate growth all of which lead to higher cash flows for the enlarged firm.  Examples would include:

Financial synergies can include the ability to increase the debt capacity of the merged firm, utilisation of excess cash from one company to finance profitable investments in the other, and tax benefits (including the recent “tax inversion” deals of several US companies).  These types of synergies can generate higher cash flows or reduce the cost of capital.

Synergies are distinct from the value of control.  The latter is simply the extra value that can be created by running the target business more effectively, such as by replacing management and changing decisions about investments, financing arrangements, and dividends.

We would follow the valuation framework for synergies set out by Aswath Damodaran in his 2005 paper titled, “The Value of Synergy”, with a few adjustments, as follows:

It is important to separate out the value of control from the value of synergy in order to avoid double counting and assess the optimal deal pricing strategy.  For example, it may be appropriate to pay all, or a large part, of the control value because the target’s owner could (in theory) make the necessary changes to improve the performance of the company on their own.  However, the acquirer may only be willing to pay part of the synergy value because such benefits can only be realised with the acquiring company.

How much to pay for synergy?

Clearly, if the acquirer pays more than the stand-alone value of the target plus the value of control and the value of synergy the deal will destroy the acquirer’s shareholder value.  So the question arises how the synergy value should be shared between buyer and seller and what determines the amount that the buyer must pay to secure the acquisition.

In a 2013 survey, EY identified that buyers were willing to incorporate approximately one third to a half of total synergies in their bid price (“Capital Agenda Insights”, October 2013).  They concluded that the willingness to share a large proportion of cost synergies was due to the confidence of acquirers in being able to identify and achieve such synergies.  Conversely, buyers perceive revenue synergies as more difficult to achieve and so share a lower proportion in order to reduce the risk of overpaying for the business.

While the EY study is interesting, the sharing of synergy value should not be based on the type of synergy being assessed but rather in the ability of the buyer relative to other bidders to achieve that synergy.  If only the acquirer has the ability to generate a particular synergy it should retain all or most of the value benefit.  However, if the synergy benefits can be exploited by a range of other companies then the negotiating power is with the seller who should be able to extract a large proportion of such synergy value by way of a higher selling price.  In practical terms, for private company transactions it can be difficult for the participants to accurately assess the relative abilities of different buyers to extract synergies which may in turn hinder an accurate pricing in of synergy value. 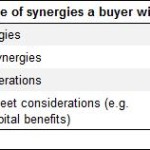 Damodaran identifies three common errors in the valuation of synergies:

Subsidising target company shareholders by ascribing to synergy what is actually the strengths or benefits that the acquiring company alone brings, for example, using an acquirer’s high debt rating to value a target with a much lower debt rating.

Mixing control and synergy, which runs the risk of double counting or using the wrong discount rate to value each element.

Various academic studies over many years have identified the propensity for acquisitions to destroy shareholder value in the acquirer.  Given that synergy tends to be the ingredient that allows the successful bidder to pay the highest price we can only conclude that the reason such deals fail is one or more of the following:

Synergies can be the competitive advantage for a strategic buyer seeking to acquire a target business.  But unless such synergies can be properly identified and valued an acquirer runs the risk of either losing the acquisition to a rival bidder (because the synergy value was missed or undervalued) or destroying shareholder value (because the synergy benefit was overvalued, handed to the seller, or never delivered).  Our valuations practice supports effective M&A decision making by the robust analysis and valuation of businesses across a range of industries and the synergy benefits that can be generated from acquisitions.