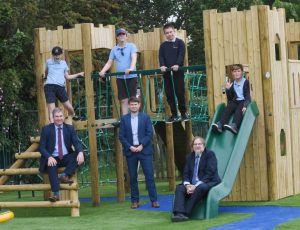 An all-age special educational needs school in Warwick has officially opened its new £55,000 adventure playground and will be known as The Bethell Adventure Playground.

The project was made possible thanks to a £45,000 grant from the Anthony and Elaine Bethell Charitable Foundation, and donations from the Leamington Round Table, Godiva Limited, WPH Charitable Trust and Friends of Evergreen School.

Local businessman and architect Anthony Bethell, along with his wife Elaine, established the Charitable Foundation in 2011, with a mandate to provide support to disadvantaged children and animal welfare through grant awards.

During its first 10 years the Anthony and Elaine Bethell Charitable Foundation has made numerous grant awards to a wide and varied range of deserving local and national causes.

Students at Evergreen School, on Brittain Lane, have been enjoying using the bright and exciting new equipment, which has been specially designed to cater for the sensory, social and physical needs of every pupil at the school, helping to equip them for life after school.

Evergreen School was formed in 2020 after the merger of Ridgeway School and Round Oak School.

The adventure playground is designed with a castle at the heart, in a nod to the town of Warwick, and has replaced an existing playground space which was in severe state of disrepair. It now includes a slide, spinning chair and plenty of opportunities to climb and balance.

Mark Freeman, one of the Foundation’s Trustees, said: “The Foundation are really proud to be able to support the Evergreen School with this endeavour.

“Through conversations with the staff at the school, we were made aware what a key project this is to improve opportunities for the children to progress into adult life and Mr and Mrs Bethell were delighted to give this project their own personal seal of approval.

“Anthony and Elaine Bethell Charitable Foundation may be a small charitable trust, but we aim to make a big impact with our grant awards, and that would clearly be the case in this instance, looking at how happy the children are with their new facility. This is the second sensory playground the Foundation has funded.”

Head teacher Nick Evans added: “With the support of the students who voted on the final design, we now have an adventure playground that is truly accessible to all, which is important as we have pupils across the school ranging from the age of four to nineteen – and it has been a real hit so far!

“We would like to thank the Anthony and Elaine Bethell Charitable Foundation and its trustees for the incredible donation, without their support this wouldn’t have been possible.”

Grant Howard, a Partner at Burgis & Bullock accountancy firm, along with Simon Foster of Shoosmith LLP, have helped to guide and advise the Foundation on funding applications and work with the Charity Commission.

Grant Howard said: “The Foundation has had a colossal impact on a wide range of local communities since it was formed 10 years ago.

“We look forward to continuing to work with Anthony, Elaine and the Trustees to support further worthwhile causes in the future.”